The beautiful ancient looking tree above is named the Bennett Juniper and it's believed to be the oldest specimen of Juniperus occidentalis known, estimated at about 2200 years old, which is down from an earlier  3000 year age calculation. Still, this tree germinated back in BCE. It's located in the Stanislaus National Forest of California. Its height is 78 feet with an average crown spread of 56 feet. The diameter at breast height (4.5 feet above ground) is 12.7 feet. So it makes it tough to understand the present  alarmist reaction to a tree being called invasive in it's native home range. As you can see in the photo at right, there are a number of trees encroaching on what use to be grasslands. It's not only the Western Juniper that is demonized, but also the Eastern Red Cedar, Ashe Juniper and even the common Pinyon Pine. Ranchers mostly dislike it. They claim the Junipers encroach and destroy grasslands for their grazing operations. Other say it is a greedy water gulping worthless tree. They even provide old historical photos of the landscape vegetation cover from many years ago of an exacting location and what it looks like today as proof of invasion. Take a look below.

The so-called Juniper invasion here is a comparison of historical and recent photos taken on the Keystone Ranch east of Prineville, Oregon. There are a number of reasons for the spread like Climate Change, blame given to lack of fire within these ecosystems, but also Juniper seeds don't blow in the wind, they are infact eaten by an incredible variety of birds which later poop them out elsewhere. Like these bluebirds above right. I was reading an article on what trees Oregonians favoured the most when it comes to trees. The Ponderosa Pine and Douglas Firs led the charge for being the most popular as well as Redwoods. I dare say though that if it were their precious Douglas Fir, Ponderosa Pine or Redwoods which were invading and encroching onto the grassland landscape, nobody would really be freaking out over a so-called invasion. Human Beings have a tendency to judge things in Nature the same way they judge other human beings. What they value as worth is what they find pleasing to the eye, taste or some other personal preferences within the five senses. Money can be made off those species for their natural resources, which would infer Junipers, Cypress, Pinyon, etc are worthless and valueless in their eyes. Yet not everyone sees these trees this way. Take for example this research done by Bob Harms from the University of Texas in Austin. Bob Harms found out that the native Texas Ashe Juniper (also demonized as a grassland invader), actually has worth as a nurse plant for Texas Madrone (Arbutus zalapensis).

The Texas Madrone is yet another beautiful and desirable tree, but of course if your business is in the cattle industry, then maybe not so much. Like most nurse plants, it would mean that Ashe Juniper probably also provides a symbiotic relationship through the mycorrhizal fungal network. Plau like most nurse plants, they probably also provide an excellent source for hydraulic lift and redistribution of water from deep subsoil layers during the hotter Summer months to other plant's seedlings. And if the hydraulics work one direction, they probably have the ability to reverse that service downwards during the wetter season. Winter rainfall quite possibly may be further facilitated into deeper subsoil layers by these woody plants. Here's what Bob Harms says in his own words about the Junipers ability as a nurse plant as well as an important wildlife food & nesting source.

"I do not view the native junipers on our land as an undesirable invasive species, but rather as a plant that offers numerous benefits not generally appreciated, even beyond providing important nesting materials for the Golden-cheeked Warbler and a winter food source for birds and mammals. Many areas of our once overgrazed ranchland are gradually being restored thanks to the mulch from our junipers, surviving on bare calcareous slopes that otherwise would have suffered even greater erosion. The view of cedars replacing open fields of grass must be balanced against that of native grasses and numerous other plants gaining a foothold thanks to the mulch and shade that otherwise would be absent. And in fact, only overgrazed fields are at great risk of juniper invasion."

Of course this doesn't mean that Ranchers and other land managers will buy into the wildlife and nurse plant importance of Junipers. Worldview and Political Ideology are strong religious dogmas which are strongly entrenched into the pysche of Juniper haters. Environmentalists aren't often much help either. Take the video below. While they do draw attention to a practice of bulldozer and chain ripping of Pinyon & Juniper habitat (something I also dislike), they then proceed to fingerpoint at a much hated opponent's Political Party as the enemy. Fact is the present administration is not at fault since this practice goes all the way back to the 1990s. The moment they blame game an opposing ideology, you soon realize it's not about protecting Nature, but rather scoring Brownie Points in the hopes of acquiring political power and hanging onto it. If you are a non-profit environmental organization, then the vicious attacks are used as ammunition for membership drive for the cause and monetary donations. As soon as the hysterical outrage has been milked for all it's financial worth, they move onto something else. Sadly, Nature still comes in last no matter who believes they won the fight. Watch this SUWA video and you soon realize it's never been about Nature as much as created hatred towards the present ruling authority.

What Eco-Activism fails to ever provide the Public with are real world viable solutions to real world needs for raw building materials and food. Demonizing other people whose worldview they hate and blaming them for what ails Nature is not the answer. Nobody responds favourably to in your face civil disobedient Activism. Seriously folks (NatureLovers), in any matter of controversy life that may involve you personally, have You ever responded favourably to someone else's point of view when they were in your face, used foul language, personal derogatory insults or violent attacks on your property or bodily harm ??? Of course not, but this method and playbook strategy is generally what we see today on the Nightly News reports. What they need to do instead is convince the landowners there's gotta be a better more responsible way of making money with land where Pinyons & Junipers also reside. On the other side of the coin, can any landowners consider the waste they have when utilizing prescribed burns after dragging a chain by Bulldozer ??? It's a waste of a valuable wood products resource and one that is basically free and pays for it's removal as opposed to just paying for it to be removed. Even if they do this themselves, there are major financial cost setbacks. Clearly appealing to their sensitivity to ecology and wildlife doesn't always work, so why not try the money angle approach as the better choice ? On that note, I'll now post a number of videos below which provide excellent explanation on how some inventive entrepreneurial people have done just that. The first videos simply go about the challenges many are facing with the increase of trees into their grassland ranges. One has an opinion of a Rancher from his prespective. Another provides an example of a small lumber mill business operator who deals specifically with Juniper wood products. Finally there is another business venture which back east actually logs large forests for wood stove pellets to be shipped all the way to the United Kingdom to service the pellet stove industry there which promotes itself as one of the eco-green solutions for alternative engery. Actually it's anything but sustainable eco-green.

The Quiet Invasion- The Rancher Perspective

Check out the link below


Maybe sometime in the future when we take a weekend drive in the country on a backroad, instead of seeing a sign that says, "Prescribed Burn Ahead" 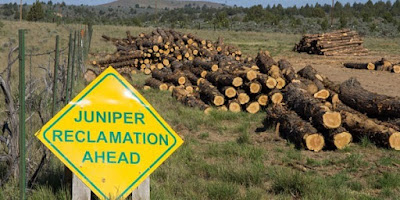 DailyMail: The bonfire of insanity: Woodland is shipped 3,800 miles and burned in Drax power station. It belches out more CO2 than coal at a huge cost YOU pay for... and all for a cleaner, greener Britain!

Daily Mail: Pure idiocy! How spending billions on subsidising an efficient coal-burning power station to burn wood is actually WORSE for the planet than before

How Wood Pellets are Manufactured 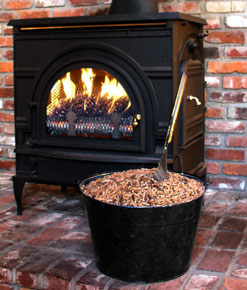 Wood Pellet Stoves are becoming more and more popular. My brother has one. Having had a conventional wood burning stove on my property for 20+ years high up in the San Jacinto Mountains above Palm Springs, California and heating my house that way, I did save money, but it was also hard back breaking work doing Fall preparation and messy both outside and inside. But it seems reasonable that there could be a market for some pellet mills somewhere in the western states. Maybe a couple of Mills. I mean what a waste burning is and I'm not exactly on board with the "burn baby burn" people either. I just don't get this incessant love affair with fire. Yes, fire is natural, it occurs in nature. But not at the rates these guys want to shove down everyone's throat. 90% of wildfires today are human caused, the other 10% come from lightning or Volcanoes. I don't care that Indians (Native Americans) did it. They are and always have been human beings equal to everyone else on the planet. They used fire to exploit the environment for it's resouces. They used it for war. They used it to run buffalo (Bison) off cliffs, often more than they could use despite the narrative of taking only what they need. That's what being a human being is all about. Anyway, below is an interesting bit I've included with a guy who did his own energy calculations and money savings. Enjoy!

Important Note: I don't endorse any of these activist non-profit sites. They do provide some interesting info, but support, follow and donate at your own risk.

Posted by Chaparral Earth at 11:24 AM