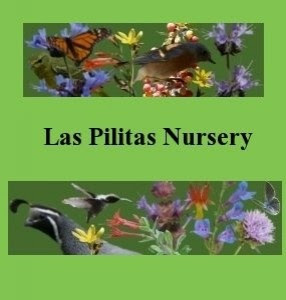 This place is not just another Cal-Native Plant Nursery. It goes well beyond selling you a couple plants or hoping for your regular repeat business like your average conventional nursery. They actually encourage you to understand and appreciate the decision you made to go native and the responsibility you have for making it a success. I say education because you will find that the outdated conventional science-based garden maintenance systems for which the majority of humans have been weaned on and trained through the youth of their gardening development will not work here. Native plants don't want the Industrial Chemical Fertilizer/Pesticidal regimens mandated by the powers that have run this Biz for generations. The infamous "Green Revolution" which resulted from the horrific science that ran the WWII  machinery, also found that not only did these same chemicals make good bombs, but they also seemed to make plants grow. Therefore these industries were NOT put out of business at the end of the war as often is the case, but rather the potential for profit$$$ $oared even more with their slogan of  "Greening the Deserts" for the good of humankind. Yeeeaah!!!

What you will find is that California Native Plants DO NOT do well under these industrial Science-based feeding programs that have been pimped by an industry obsessed with keeping the money train status quo and the dirty little secret is that all those other non-native ornamental landscape plants on this planet Earth don't like it either. But that knowledge has been cleverly kept behind a closed door for decades until just the past decade or so when more and more dedicated responsible  Researchers have discovered the reality of just how the natural world functions & operates. This all has come out that most conventional big-business run and influenced science has had it wrong for decades and hasn't said anything. That's where Las Pilitas Nursery and it's owner Bert Wilson and other responsible nurseries have made a huge difference by their educational programs. So as not to take away the amazing thunder of his website's instructional pages, here are some important links on his site which will benefit everyone, including those not sure about going native. On both these links there are two main subject tabs in the upper left hand corner of the menu bar. Click on these and you will find  further fascinating subject sub-titles followed by other side drop down bars with more specific detailed material.

California Has Distinct Plants And Animals 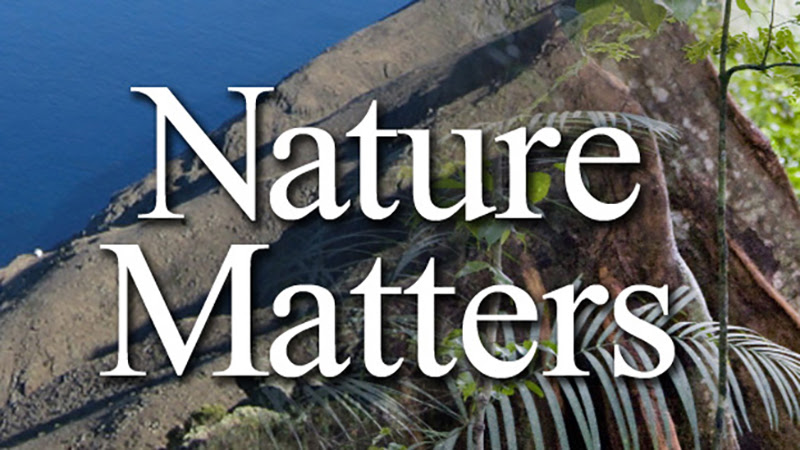 You may perhaps wonder why a native plant Nursery that is in the actual business selling plants becomes so involved in educating you about creatures like animals, birds, reptiles, amphibians, insects etc. That's okay, it's understandable, the conventional type of commercial plant nurseries don't do this either and may even wonder themselves why Las Pilitas Nursery does this as well. The conventional Nurseries have their own version of an plant educational system. This usually  consists of Advertising promoting retailed products like Miracle Grow, Round-up, etc made by the monopolized Industrial Players who have for decades controlled the thinking of what plants need for success. Bert Wilson focuses quite a bit on many animals and birds because they are very much a part of what makes the natural world a healthy place not only for plants, but also mankind in general. Ecosystems around the world are failing not only because of vegetation destruction and removal, but also because of the disappearance of it's animal and bird life. Wilson's methods attract wildlife and they will respond to your landscape project. Ever notice the Acacia tortilis which is the picturesque poster child of the African Savanna ? Ever wonder why or how it gets that unique postcard picturesque shape and form so admired and romanticized by travelers ? Here's why !!! 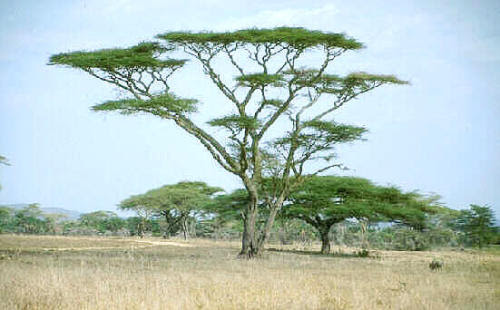 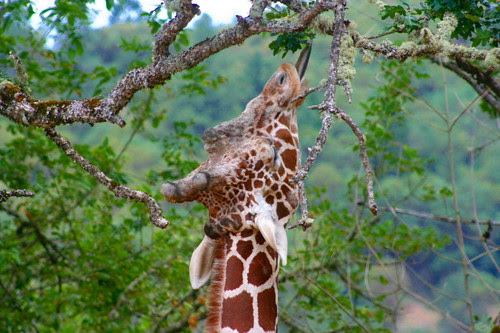 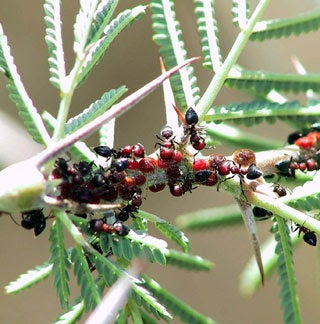 Okay, so do you think I've gotten myself off topic here ? Not at all! I'm merely illustrating a point that has local application anywhere in the world. Acacia trees need a lot of critters to get where they are in that beautiful picture at the top. They start out needing what is known as a Nurse or Mother Plant, then as they grow older the danger of living in a landscape swarming with herbivores can throw another wrench in the works. In comes Acacia Ants to nasty away all those hungry mouths with their stings and biting jaws. But then the tree grows bigger until finally the tall herbivore in the next photo, a Giraffe prunes and shapes the tree with is long black tongue. This is how the tree gets it's form. It is at this point in it's life and structure where it can support other animals and bird life. Take those weaver birds and their huge nesting colony. 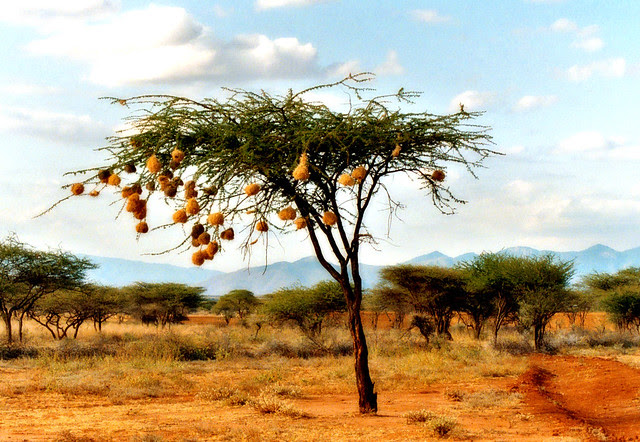 Take all those components out of the ecosystem and you'll never see such a picturesque biodiverse view ever again. Take any one or two components away and the system could still fail, but it will do so more slowly as when a Domino chain slowly progresses to a conclusion. The type of Acacia you will be left with will be no more than some large shrub-like tree that doesn't have anywhere near the previous value to the ecosystem. This is what is happening worldwide now at the present. In a similar way Bert Wilson tries to instill deep appreciation for California's Natural Environment in his readers. Chaparral is generally a plant community very under-rated and under-appreciated. This plant community in many areas has lost a fair amount of wildlife. Adding this component back into the system would no doubt show obvious improvements, but you can start with your own Urban Landscape. Tutoring yourself at home will prepare you for any productive restoration project you may want to apply for and there are many.

The Escondido California Store is the only one I've ever known, been to and that I've recommended to those folks living in San Diego & Riverside county areas where I lived before. Here is the City-Data info on they, their nursery and their physical location there. Technically the address is not exactly in the city of Escondido, but rather north of there on Olde Hwy 395 off of the Interstate 15 freeway between the Lilac Road & Gopher Canyon Road exists. UPDATE: Since Bert Wilson's death (March 2014), the Wilson family has decided to close the Escondido Nursery and continue only with the Santa Margarita Nursery up near San Luis Obispo. 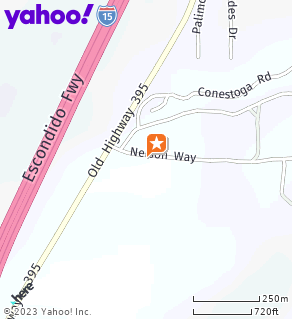 I have to assume from the photos I've seen, because I've never actually been to the Santa Margarita location near San Luis Obispo California that the north Escondido store is probably their largest outlet. I remember when they first got started. Very small operation but it gradually grew much larger, so much so that they planted a series of California Sycamores as a natural form of seedling plant shading. Not only does this add a natural environmental shade factor that Nurse Plants or Mother Trees accomplish in the wild for young plants, but it saved on the often expensive conventional steel framed shade netting cloth methods that many of the larger Home Improvement Chain Stores use.  It also no doubt saves on their watering/electric bills. But take a look at this next photo and you'll see what I mean. I actually saw the tiny Cal-Sycamore (Plantanus racemosa) seedlings when the first planted them in the ground by inter-spacing them between major plant rows.


Incredibly, and they don't know this, but mostly likely will now after reading this, is that I purchase 6 Cal-Sycamore Seedlings from them after they planted theirs and planted them in my mum's backyard. I created a long large mound or rather berm in a huge curved boomerang shaped pattern and at around each end grouped three trees together to get that wild grouping effect so common in the wild. Here's how big they have gotten now and see how they compare to the Las Pilitas Nursery trees in the above photo.

In the last photo you can get a height scale on the left side of the roof line of my mothers house.

Interestingly, I took a lot of flack for planting those in mum's backyard from some fellow landscapers who hate to deal with maintenance of California Sycamores, especially dealing with leaf drop. Yes the leaves are very large and have an incredible amount of tiny hairs covering the surface for which some may get an allergic reaction, but I've never had a problem. I find them easier to deal with as opposed to tiny leafed trees where the leaves can accumulate in cracks and crevices all over one's backyard. Ground up, I've put the leaf matter back into the understory of the trees and around other plants.
(I've never thrown anything away for a compost trash truck to haul off somewhere)
Incredibly the biological condition under those soils there is so enriched with the mycorrhizal innoculum and bacterial applications I've infused at time of planting, that most any mulch or compost is quickly dealt with by these micro-organisms and the critters who've moved in as a result of proper soil management. The resulting breakdown of nutrients gets sent right back up into the plant networks.

On another amazing note however, my mother doesn't have to run that industrial sized Air Conditioner she had mounted on the roof over a decade ago and the electric bill has reflected this. The setting is a cool shady moist oasis woodland garden with several smaller native understory plants like Spice Bush calycanthus-occidentalis , Catalina Currant Ribes viburnifolium, Fuchsia Flowering Gooseberry Ribes speciosum and Western Redbud Cercis occidentalis. The afternoon prevailing winds from the coast breeze through the understory and flow in through the back double-screened door. It'll still be hot in summer out front, but not in the back.
I'm not really sure if Bert Wilson has their young plants inoculated at time of replanting, but it's always a good idea to purchase a good mix of inoculum to soil mix at time of planting. Over a decade ago when I first spoke with him on the phone about his Garner Valley Girl Scout Camp restoration project, he mentioned they didn't inoculate at that time, but that may have changed. Call and ask. Here are the other understory plants which I purchased from Las Pilitas Nursery that I referenced above and these are from Bert Wilson's own photos.

Well, it wouldn't be right if I at least didn't give folks the location of the Santa Margarita Store. So here it is.

One thing you'll notice and never get away from is that Bert is really into Hummers. In fact with the natives, they practice and encourage (and so do I) people to plant native habitat situations which will mimic something in nature and attract the native wildlife. Seriously, you'll be glad you did.


As I've already stated at the beginning above here, their success has been their great educational work coupled with their personal hands-on experience and motivated by something they love very much and this of course is the natural world around them in California. Please bookmark and visit their blog which the public is invited to comment, ask questions and just generally improve their knowledge and understanding of southwestern native plants and their various ecological plant communities.

I hope this has been interesting as well as educational. It's not a sales pitch, I get no commission from this. I just have used their services for many years and have just wanted to share my success with others out there with similar interests.