Utilizing Ornamentals of the Legume Family in Southwest Landscapes

These plants have great splashes of colour which brighten up otherwise drab areas. Some are native and others are not, but they truly do work in the southwestern landscapes.

This was taken in downtown Brawley California back on my visit in 2011 at the beginning of July. It was located on the corner of a property belonging to a 7-11 (which BTW are also in Sweden) convenience gas store. Many older neighborhoods have numerous ugly utility poles and other utility infrastructure. Newer  neighborhoods also, even if the electrical conduits are underground will often have terrible junction boxes spaced out along a side walk between property lines. Finding a colourful plant that will create eye appeal and focus attention away from the Utility apparatuses call be a challenge as you want to hide them, but also allow for maintenance access. Same with the pic below. Mexican Red Bird of Paradise along a hot dry side street at the 7-11 with zero landscape options other than that ratty looking Oleander and no irrigation that I could observe when I walked around the planter.

There is no arguing that such colourful striking plants can make an otherwise ugly piece of Utility infrastructure even look good. Whether or not this was the landscapers intention, it nevertheless resulted in such a aesthetic purpose and worked very well. They do exceptionally well in extreme heat situations. In this case and already hot climate in Imperial Valley along side of  street and parking lot asphalt pavement. Away from the coast and in the interior valleys of So-cal they do well, but leaf out and bloom somewhat slower and later than those in the deserts. Put in full sun and hot location in valleys west of the coast mountains. So I'd have to assume they used a water hose periodically.

First time EVER I saw this plant used was back in the early 1980s along the Interstate 10 freeway landscape entering  Phoenix Arizona. Phoenix was never truly one of those places that was a final destination for me. Mostly a gas stop, but never for Motel or Food. Mostly is was a place on the way somewhere else either north or south, but never Phoenix. It was at this time that I actually did take an opportunity to stop and take a much closer look. I had never really seen them before, but they clearly had familiar characteristics that I was familiar with. There are many similar or like desert plants with those lovely compound leaves, colourful compound flowers and characteristic pea pods. As you can see from the Argentine Bird of Paradise below which I photographed in my mum's front yard three weeks ago. I've never seen the Poinciana (Mexican Bird of Paradise) naturalizing itself anywhere in the southwest, but the one from Argentina will do so, but not to the point of invasiveness that I am aware of or have ever seen. Traveling east of Ramona California on Highway 67 I did see a group of naturalized reseeded Caesalpinia gilliesii  along the highway. Both the Argentine Native and the native southwestern desert plant shown at the bottom here, Baja Fairy Duster, are a host plant for the Marine Blue caterpillar & butterfly ( Marine Blue (Leptotes marina) ),  although I've never noticed it on the "Mexican bird of Paradise" [Caesalpinia pulcherrima]  . Although it may be possible. Still, they all work well and attract both beneficial insect and hummingbird pollinators. 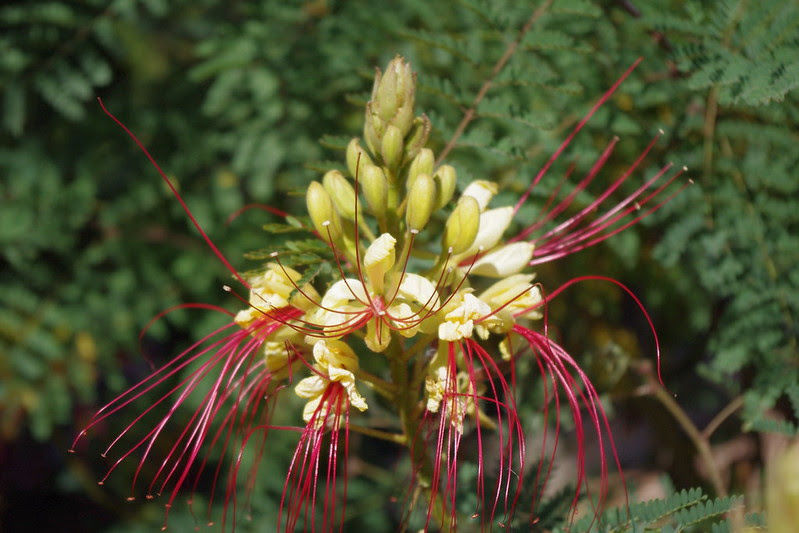 This Bird of Paradise version is native to Argentina and Uruguay. And this flower itself is found in my mum's very own front yard. Notice the similarity with the flowers between both ? There are various common names, which often times will confuse. But clearly all are strikingly different. That's why there are scientific names to differentiate between them. This is true of most similar plants used in landscapes throughout the globe. I would have photographed the Mexican Bird of Paradise in my mum's yard, but they are slow to leaf out and bloom like all locations in El Cajon, but the Argentine variety everywhere is doing beautifully. 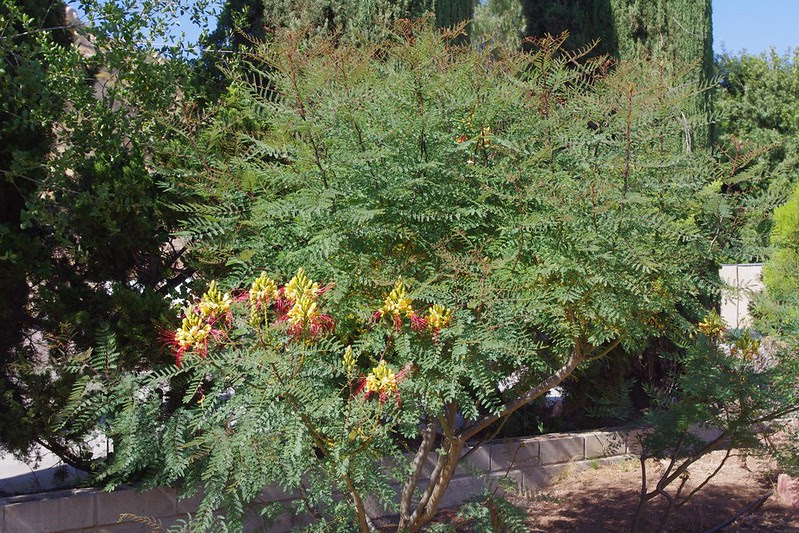 You can see on the top of this plant the newer growth which also will have future blooms in a couple of weeks from this writing. Notice also the reseeded and naturalized smaller plant to the lower right in this photograph ? These really don't receive that much water anymore. They no longer need it and that should be the ultimate  goal for most gardens and landscapes in the southwest as water rates continue to skyrocket. At the bottom of the page here, I'll post a picture of what is truly illustrative of many southern  California gardens and landscapes which home owners have simply let go to ruin because of not only water rates, but also variable sewer rates which are based on water use, irrespective of where and how the water is used in the landscape. People need to be more plant and landscape smart and this means being educated on how the plant would in the southwest actually works mechanically as well as scientifically.

This is a very well known plant now, but not always the case to most people. It was never as available previously as it is now, and not just in the Native Plant Nurseries.  I see this everywhere now being used as a hedge and/or parking lot planter medians in commercial developments. Very tough little plant that thrives in heat, hence near and around black asphalt pavement is perfect. Baja Fairyduster is tough, native to the desert side of Baja up into the boulder strewn desert mountains near Ocotillo on the south. As you can see in the top photo above, the landscape has further matured in 2015 when that photo was taken as opposed to the 2013 photo at right which even shows a smaller Mexican Fan Palm. 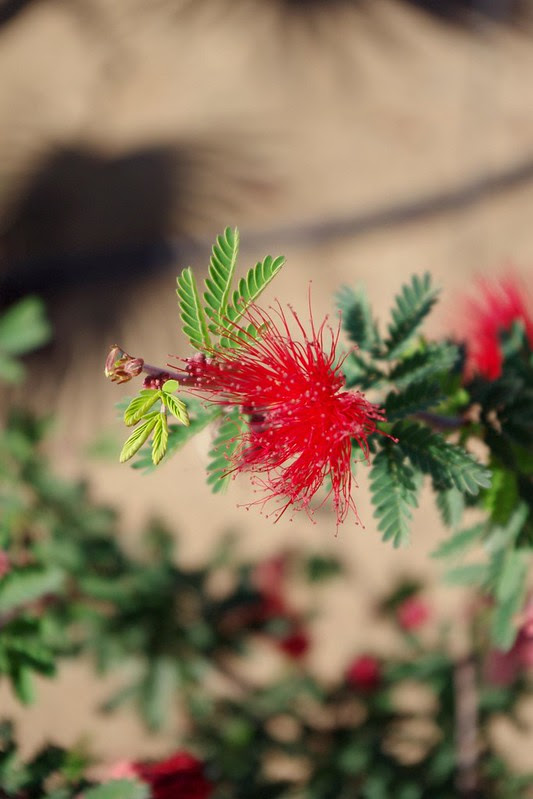 These flowers are beautiful, though often not terribly long lived. I went ahead and inoculated it once again with a blended mycorrhizal mix from Mike Amaranthus company in Grant Pass Oregon called Mycorrhizal Applications Inc. The flowering greatly improved while on my entire visit there. However they appear to be very prolific at producing newer and newer blooms every day if healthy and colonized with mycorrhizal inoculum. They remind me of the southwestern desert's answer to the Aussie choice of  Dwarf Bottlebrush Callistemon citrinus 'Little John'  , which I actually love BTW. This is one of the easiest plants to grow antwhere there is heat and little water. Just use a good mycorrhizal blend at time of planting a one gallon container tree and NEVER use science-based fertilizers. Just add some decorative mulch. 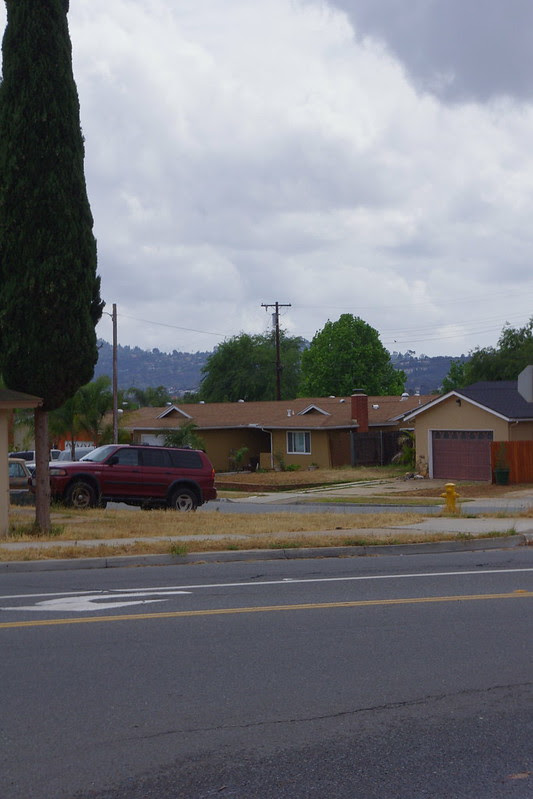 I took this at an intersection angle so as not to specifically identify the two residents here, but this is a common site throughout many neighbourhoods in El Cajon and other cities I've cruised through on my visit here. Skyrocketing water rates accompanied by Sewer fee assessment based on total water usage at the meter  has forced many to abandon and hope of a green landscape. Of course as I've proven many times over, you don't have go down that road. Apparently annual grass Foxtails have become the "IN" thing in El Cajon since I left. Interestingly, in the richer wealthier locations, these folks are unconcerned over water shortages and rates. Clearly, both set of circumstances need incredible amounts of education.
Posted by Chaparral Earth at 5:45 PM